Studenica is a monastery with three churches on the river of the same name southwest of Kraljevo, Serbia. It was founded at the end of XII century by Serbian King Stefan Nemanja. The most important monument is the Bogorodičina church (1183–96), a single-nave building with a dome, built of marble and richly decorated with Romanesque decoration. Externally, the Church harmoniously reconciles two architectural styles, the Romanesque and the Byzantine. The blending of these two styles eventually produced a particular style of architecture known as the Raska School.

The interior of the church was repeatedly painted with frescoes of biblical and historical themes (1208–09, 1235 and 1568). The entire complex has been on the UNESCO World Heritage List since 1986.

The artistic achievements of the sculpture of Studentica culminate in four portals, primarily the west one, inside between the narthex and the
exonarthex. On the north wall under the dome, there is a window made of many square panes with medallions carved on a leaden plaque which represent eight fantastic animals – the symbols of the Virgin’s virtues. There are also two rosettes denoting the Divine Eye. The masons came to Studenica most probably from the Adriatic region, perhaps from Kotor, where Nemanja used to have a palace. They left an insciption in Serbian lettering on the tympanum of the west portal.

The original frescoes have been partly preserved in the altar area, under the dome, on the west wall, and in the lower registers of the nave. The most splendid representation is that of the Crucifixion, painted on blue background in 1209, one of the paramount achievements in Serbian art. On the south wall there is the “founders’ composition” which shows the Virgin taking Nemanja-Simon with the church model to Jesus Christ as the Magistrate Impartial.

Northward from the Studenica refectory is the eighteenth century monastic residence, now housing a museum and displaying a
number of the precious exhibits from the Studenica treasury. However, the frequent wars and plunders have considerably reduced
the richest depository of Serbian spiritual life and culture in general.

Northwest of the Church of the Virgin there is the church of saints Joachim and Ann, known after its founder King Milutin as the King’s Church. The church was constructed in 1314, in the form of a compressed cross, with the exterior structure of an octagonal dome. It is built of stone and tufa, with plastered facades. Inside this small church are frescoes of significant value, which date from the second half of the fourteenth century, painted by King Milutin’s favorite artists. 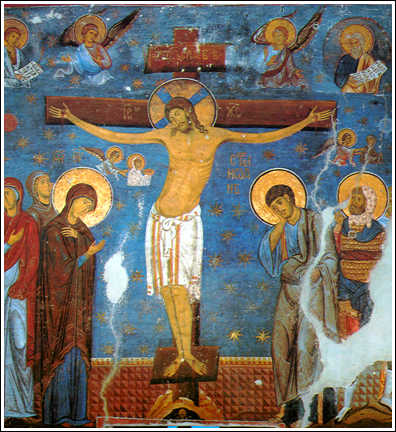 The complex of the Studenica monastery includes the Church of St. Nicholas, a small single-nave church frescoed inside
with works from the twelfth or possibly early thirteenth centuries. Between the Church of St. Nicholas and the King’s Church are the
foundations of the church dedicated to St. John the Baptist. West of the Virgin’s Church, there is an old refectory made of rubble,
built during the time of Archbishop Sava. Finally, on the western side of the monastery complex there is a bell tower, erected in the thirteenth century. There used to be a chapel inside; now, only fragments of frescoes can be seen there. Remains of fresco painting have also been numbered on the external part of the narthex, splendidly representing the Nemanjic dynasty genealogy. They obviously relate to the frescoes from the Virgin’s Church which date back to 1208-9.